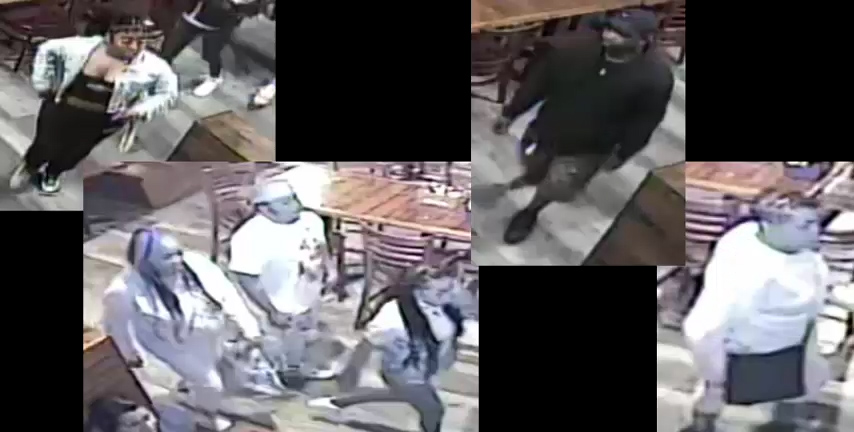 DAVENPORT, Fla. (WFLA) — Polk County’s top law enforcement official would like to offer a group of accused diners and shooters another free meal.

“We’ll just lock you up and give you a nutritious meal. It won’t be as delicious as the Ale House. It’s a guarantee,” Polk County Sheriff Grady Judd said. “We’re not even going to ask you to pay for it.”

Authorities say a group of 10 adults and four children ran up a $320 bill at the Davenport Ale House in Posner Park in January. Then, security video shows them casually walking out.

“It definitely hurts. The waiter doesn’t get his tips. We lose money,” said Ian Marks, manager of Davenport Ale House.

Marks says once the meal was over, the band members asked their server to split the bill into separate checks and get boxes to take away.

“The waiter noticed a few left to go to the bathroom, a couple came out, then when she came back with the takeout boxes, they were pretty much all gone, they just ran out the door,” said Marks said.

Marks said it’s not the first time this has happened. It instructs its servers not to track people for their own safety.

Now, after losing hundreds of dollars at a table, he has taken action.

“Nobody wants to feel like they have to leave a credit card to sit at a table, but if it’s a big party, that’s something we change as a company to avoid that. “, did he declare.

The credit card would be used as a hold, just in case.

“If something like that happens, we have ID, we have something we can charge or go to the sheriff,” Marks said.

The manager said he contacted nearby restaurants to let them know this group was committing these crimes.

“We looked for them. We don’t know where these people are,” Sheriff Judd said. “What do you think you can go to someone’s store and eat their food and drink their drink and walk away without paying?”

If you have any information regarding this case, please contact Detective Townes at 863-236-3900 (Case #22-3974). You can also submit an anonymous tip to Heartland Crime Stoppers in four ways:

Russia’s invasion of Ukraine must trigger an ESG review