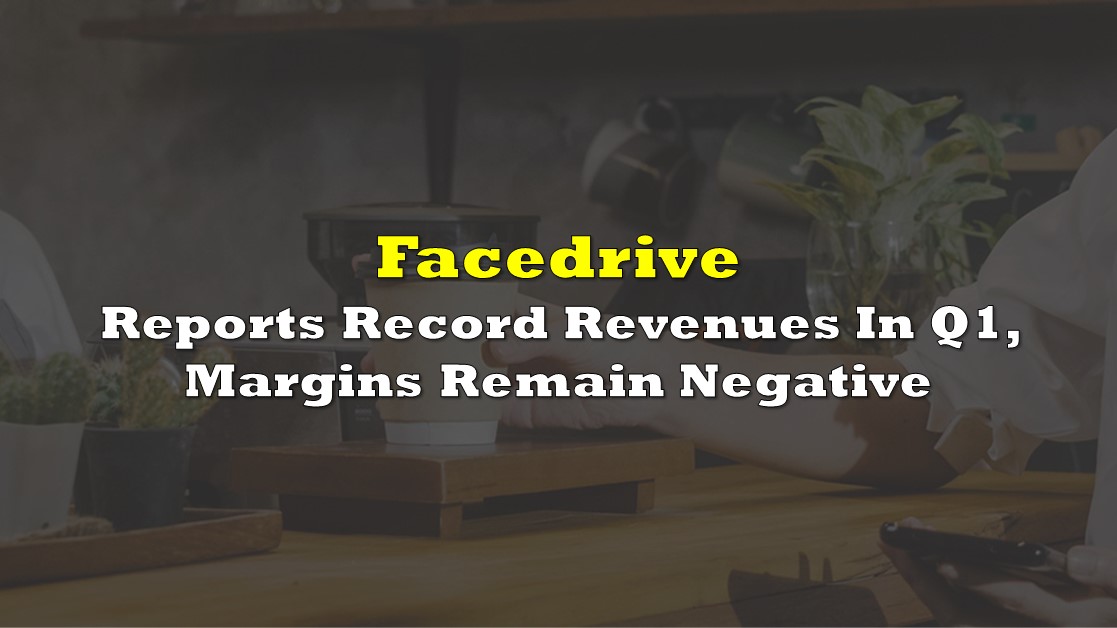 Facedrive Inc (TSXV: FD), which now goes by the name STEER, released its first quarter funding results this morning. While the company said it posted “record revenue” for the period, the company’s revenue was relatively flat compared to its fourth quarter results.

Revenue for the quarter was $10.7 million, an increase of 4.1% over fourth quarter revenue of $10.3 million. Revenue, however, reflected a 287.1% year-over-year improvement from the $2.8 million in revenue recorded the previous year.

Revenues were broken down as follows:

“2022 is off to a strong start. In the first quarter of 2022, we almost quadrupled our revenues compared to the first quarter of 2021 and continue to reduce operating costs, which is a signal of significant growth while increasing the operational efficiency of the company. Our focus on building on-demand and subscription-based offerings and significant investments to align operations with this direction has resulted in solid revenue growth and concurrent savings in operating costssaid CEO Suman Pushparajah.

While revenue may have reached an all-time high for the company, the business obviously still hasn’t reached scale, with the cost of that revenue coming in at $11.7 million for the three-year period. months, which means that gross margins are still in negative territory.

On top of that, the business had operating support costs of $3.7 million in the quarter, as well as general and administrative expenses of $2.0 million, resulting in an operating loss of $9. $.1 million for the three-month period.

After receiving government grants of $1.0 million, which were partially offset by interest charges, the company recorded a net loss for the period of $8.2 million.

This cash position is despite raising $4.7 million on March 1. The company has since completed a second financing, which closed in April, for gross proceeds of $17.5 million.

Facedrive last traded at $0.64 on the TSX Venture Exchange.

Information for this briefing was found via Sedar and the companies mentioned. The author has no security or affiliation related to this organization. Not a buy or sell recommendation. Always do additional research and consult a professional before purchasing a title. The author holds no license.

As founder of The deep dive, Jay focuses on all aspects of the business. This includes operations, as well as serving as lead writer for The Deep Dive’s stock analysis. In addition to The Deep Dive, Jay writes freelance for a number of companies and has been published on Stockhouse.com and Canna Investor Magazine among others.