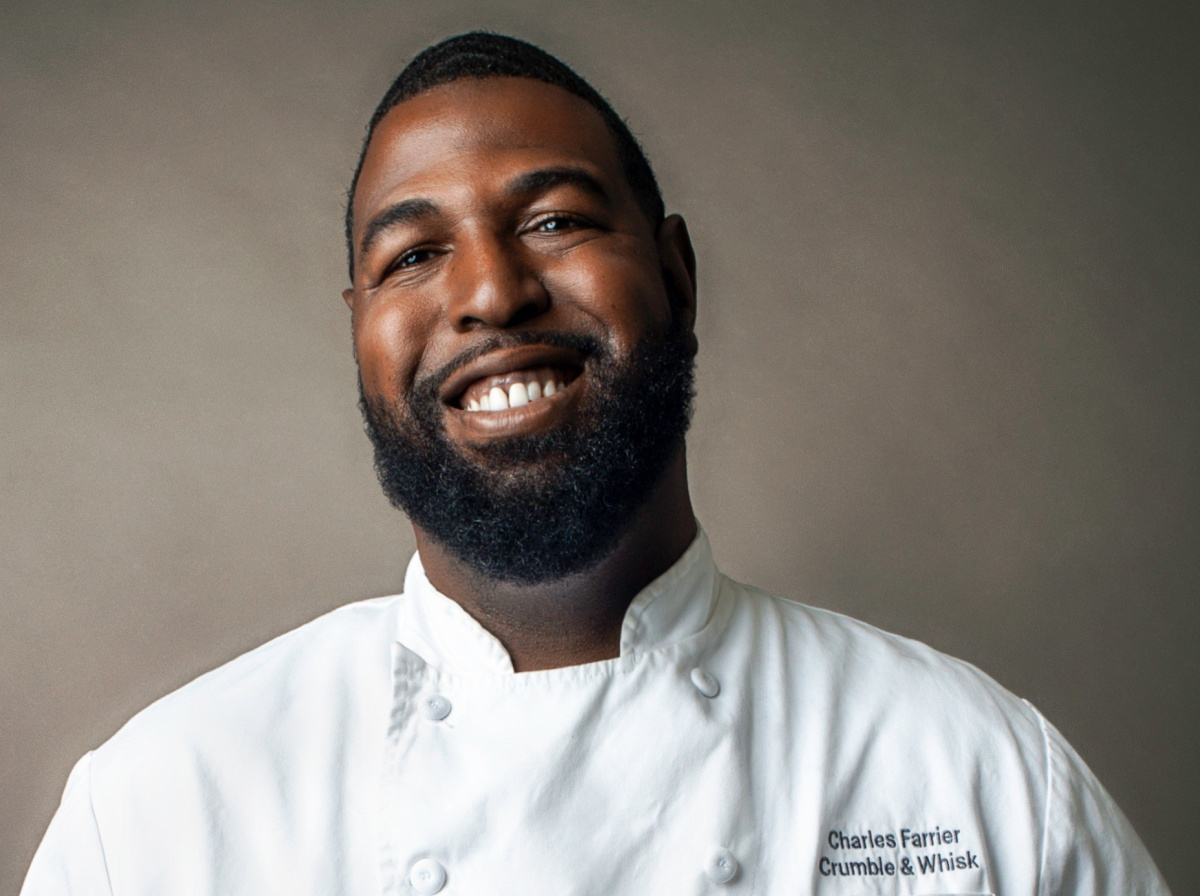 Charles Farriér lives out the fantasy every foodie-slash-office-drone dreams of: one day, a homemade vanilla bean and bourbon cheesecake he brought to an office potluck for his colleagues at the law firm received rave reviews, prompting a colleague to suggest that she pursue a professional career. pastry shop.

He took that advice and started Crumble & Whisk, which started out as a mini cottage cheesecake business sold at Bay Area farmers’ markets. Nine years later, he opened his first physical store in the Laurel neighborhood of Oakland.

Prior to his time at corporate headquarters, Farriér, an Oakland native, had a passion for cooking. Her father, who cooked for his family of seven children, taught her how to use fresh ingredients and upcycle leftovers into new dishes. Paternal advice, as well as regular visits on Saturday mornings from Jacques and Julia cook at home and Martha Stewart’s baking show on KQED, helped shape Farriér’s culinary vision from an early age. (He’s frustrated, he says, with today’s barrage of game show programming at the cupcake wars and Ruthless Kitchen. “Now all of these shows are competitive,” he lamented. “No one wants to teach the art and technique of baking anymore.”)

Years later, Farriér graduated from culinary school and spent time working in the kitchens of the Purple Plum and Blackberry Bistro, but eventually left the company for an office job…until this meal – fateful sharing rekindles that spark. After some time spent experimenting in the kitchen, Farriér developed a slate of mini cheesecake flavors including beet and berry, pineapple sage and, of course, vanilla bean bourbon that has it all. sets off. Soon he was drawing crowds to the Ferry Plaza Farmers Market in San Francisco and the Grand Lake Farmers Market in Oakland.

In time, he also caught the eye of San Francisco-based culinary incubator La Cocina and luxury cookware retailer Williams-Sonoma, which struck a deal to sell his personal-sized cheesecakes. . La Cocina and a successful Kiva campaign have helped Farriér secure his new space at 4104 MacArthur Blvd., which he hopes to open in August.

Farriér doesn’t mince words when it comes to the Byzantine process of opening a store in the Bay Area. “A lot of expenses arise that you have no control over,” he said. Although he anticipated costs for employees, ingredients and other expenses of owning his own bakery, there were a number of unpleasant surprises.

“We had a lot of plumbing issues at first, then the gas line had to be fixed, and I spent thousands of dollars to get them fixed,” he said.

“And just yesterday I had to fix our sewer line, which cost about $1,600.” Realizing that it’s rare for big banks to lend to small businesses, Farrier has launched another fundraiser in recent weeks to help cover some of its construction costs.

If you think all of this has Farriér stressed out a little, you’re not mistaken — but, thankfully, his best anti-anxiety tool is built into his business. “Pastry is actually relaxing for me, giving me a sense of peace and creativity,” he said, challenging the notion of a rigid, fussy discipline that lacks the innovative improvisation of cooking.

“Pastry has a flexibility that allows you to think outside the box and do fun things. Once you learn the technique, you can go wild creating flavor profiles.

You’ll see some of that savagery on Crumble & Whisk’s opening menu, which will include Farriér’s signature cheesecakes, mini and full-size, in flavors like Strawberry Fields, Maple and Citrus Crumble. pecans and chocolate marble. It will also offer its best-selling vegan cheesecake made with vegan cream cheese and tofu, tinted with a splash of lemon and vanilla bean paste.

Farriér also plans to expand its menu to offer a range of products outside of the cheesecake realm. Homemade cinnamon rolls, pecan bourbon coffee cake, green cardamom banana orange blossom cake, and banana pudding will all grace the menu on opening day. . Be on the lookout for fruit turnovers with seasonal homemade jams, cheese puffs and scones.

It’s this fun stuff – developing the menu, creating new dishes – that keeps Farriér going as he rushes to open his new restaurant. When asked what advice he would give to young bakers who, like Farriér, want to get into his field, he recommends building your craft first, as well as understanding that you’re not going to get rich overnight. next day. The most important thing, however, is to take care of your customers and make sure they come back, he said, because “they’re the ones who help keep the lights on and keep the business going. afloat”.