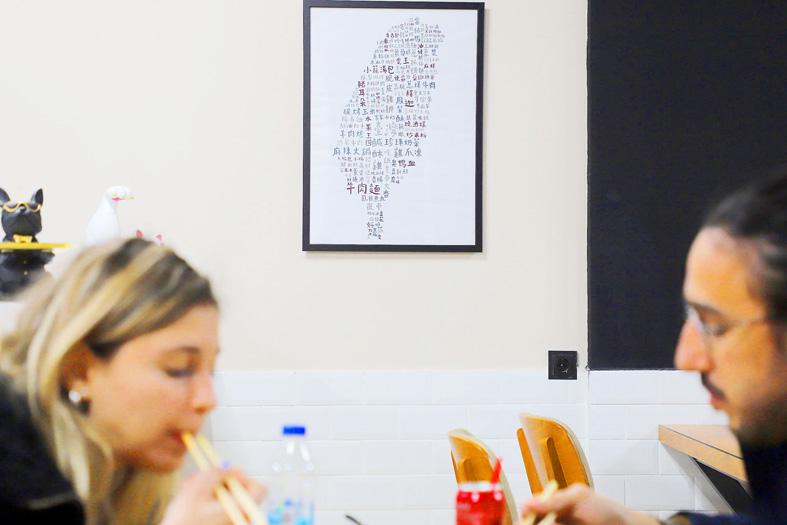 CATERING COMPANY:
Chen Yu-jun and her Turkish husband started over in a profession they had no experience with, finding joy, success and happy customers along the way.

Turkey’s only self-identified Taiwanese restaurant has cemented its place as a mainstay in the Aegean coastal city of Izmir after two years of hard work by a young couple who started a new life by entering the unknown industry.

Anyone in Taiwan would have no problem ordering Lunar New Year food with a phone call, but 8,000 km away in Turkey they’d be hard pressed to find Buddha Jumps Over the Wall, Drunken Shrimp or Niangao. (年糕). Even enthusiastic chefs trying their hand at recipes would find them less simple than they appear.

Take for example the labor-intensive Buddha Jumps Over the Wall soup. Some dried ingredients need to be rehydrated ahead of time while others need to be slowly cooked, then carefully layered in a pan before going through a steamer for hours. Just thinking about the complicated process discourages even the most ambitious chefs from trying it themselves.

“Culinary skill is one thing,” said a Taiwanese resident of Turkey’s capital, Ankara. “In Turkey, it is quite difficult to gather all the ingredients. Ruining him after all that would be a travesty.

Despite all these obstacles, many Taiwanese living in Turkey still enjoyed full tables on Lunar New Year’s Eve this year, sagging under the weight of their favorite classics.

The woman responsible for these vacuum-sealed packets of nostalgia is Chen Yu-jun (陳俞均), owner of Jun Taiwanese Kitchen in Izmir.

It was the first time she had taken holiday orders in her two years at the helm of the restaurant. Chen pays tribute to his fellow Taiwanese for their enthusiastic support, his eyes betraying his joy as the rest of his features hide behind his protective mask.

Since the restaurant opened in late 2019, it has remained the only one in Turkey to prominently display “Taiwanese” in its name.

Its location near Izmir Bay in Konak – the administrative, artistic, cultural and commercial center of Izmir – makes the restaurant a popular destination for Japanese and Chinese tourists.

Local people, on the other hand, find it difficult to accept unfamiliar cuisines, Chen said.

Anyway, the restaurant has won over many locals who have become regular customers.

“The fact that our food can be accepted and enjoyed by them is more rewarding than earning money,” Chen said.

Pulling down her mask to settle in for an interview, Chen brushed off a suggestion that she’s braver than most to have achieved so much at the age of 27.

“I think meeting him was enough,” she said of her Turkish husband, Sefa Turk Yilmaz. “I really didn’t think too much about it.”

“When I told my family that I was going to marry someone from Turkey, they were also very calm,” she said. “My mum said if I’m not happy, I can just come back.”

Chen started teaching English online when he was 22 years old in Taichung. Yilmaz was one of his students.

Six months later, the student became a guide, as he showed Chen around Turkey on a tour that would become the start of his new life in the country.

After moving halfway around the world to marry Yilmaz, Chen pledged to learn Turkish quickly to help her find work.

Thinking that a job search might be too much to handle when settling in a new country, he suggested they start their own business instead.

In his early thirties at the time, Yilmaz quit his job as a product manager at a metal processing company and went headlong into the restaurant business.

“He was quite careful, just a bit slow,” Chen said. “When the restaurant was busy, he was too slow and couldn’t keep up.”

“Sometimes when the orders piled up, he just stared at them, not knowing what to do,” she said, laughing at the memory. “That’s when I said to him, ‘What do you think you’re doing?'”

Yilmaz, who was quietly seated next to Chen, jumped into the conversation.

“Opening a restaurant was an idea we both had. We’ve figured that out as we go over the last couple of years,” he said.

“As our menu becomes more diverse, we get busier, but isn’t that the essence of starting a business? There are difficulties and there is joy,” he added.

On the February evening of our conversation, Izmir had escaped its freezer and Jun Taiwanese Kitchen was in the midst of a manageable dinnertime rush.

About 10 customers crammed into the cramped smoking area out front. Stepping inside, visitors are greeted with a prominent map of Taiwan next to a photograph of Taipei 101, opening into a dining area which, due to the COVID-19 pandemic, contained only 10 tables spaced out, eight of which were occupied.

Easily visible in the semi-open kitchen was an all-black-clad employee who was busy preparing food while a woman sat nearby folding dumplings. She quickly filled the pan with neat rows, attracting customers who rank the dumplings among their favorite dishes on the menu.

“Kung pao chicken, sweet and sour chicken, chili oil wontons and dumplings are the most popular,” Chen said. “We sell at least 300 a day. Turkish customers love these crisps, especially with the beef filling. »

“Even though we make them every day, we usually sell out,” she said, adding that due to demand, she taught every employee how to wrap a perfect dumpling.

When she first moved to Turkey, Chen said she found it hard to adapt to Turkish cuisine and Asian restaurants “weren’t good”, so she decided to switch from cooking. home to chef.

“The worst thing was when I ate kung pao chicken in an Asian restaurant and it came out liquid,” she said. “So I had the idea to do it myself.”

“We started out with a small storefront to test the waters, and when things were going pretty well after a year, we moved to this bigger venue,” she said. “It’s the best battleground for all the old-school Asian restaurants. There are about 10 of them now.”

Even with the competition, Chen said she doesn’t adjust her recipes to meet local tastes.

“I think of it this way: if a dish isn’t authentic, I won’t sell it,” she said. “So when creating the menu, if we think Turkish customers won’t like it, we don’t add it.”

Yilmaz said he is becoming more Taiwanese day by day. He enjoys drinking the restaurant’s shaken tea and takes his self-proclaimed role as a cultural ambassador seriously.

“My wife is Taiwanese, so of course I want to help her promote her and introduce Taiwan to Turks,” he said.

Looking back on the fuzziness of the past five years, Yilmaz said the experience made him think of chicken kung pao – “sweet, salty, spicy and sour” all at once.

“There’s sweetness in spice and spice in sweetness,” he said.

“At first it makes your tongue feel a bit numb and spicy, then a sweet and sour flavor takes over,” he said. “The chicken is tender and fresh, the peanuts crunchy.”

“I could eat it every day. Even decades later, I wouldn’t get tired of it,” he added.

Comments will be moderated. Keep comments relevant to the article. Remarks containing abusive and obscene language, personal attacks of any kind or promotion will be removed and the user banned. The final decision will be at the discretion of the Taipei Times.