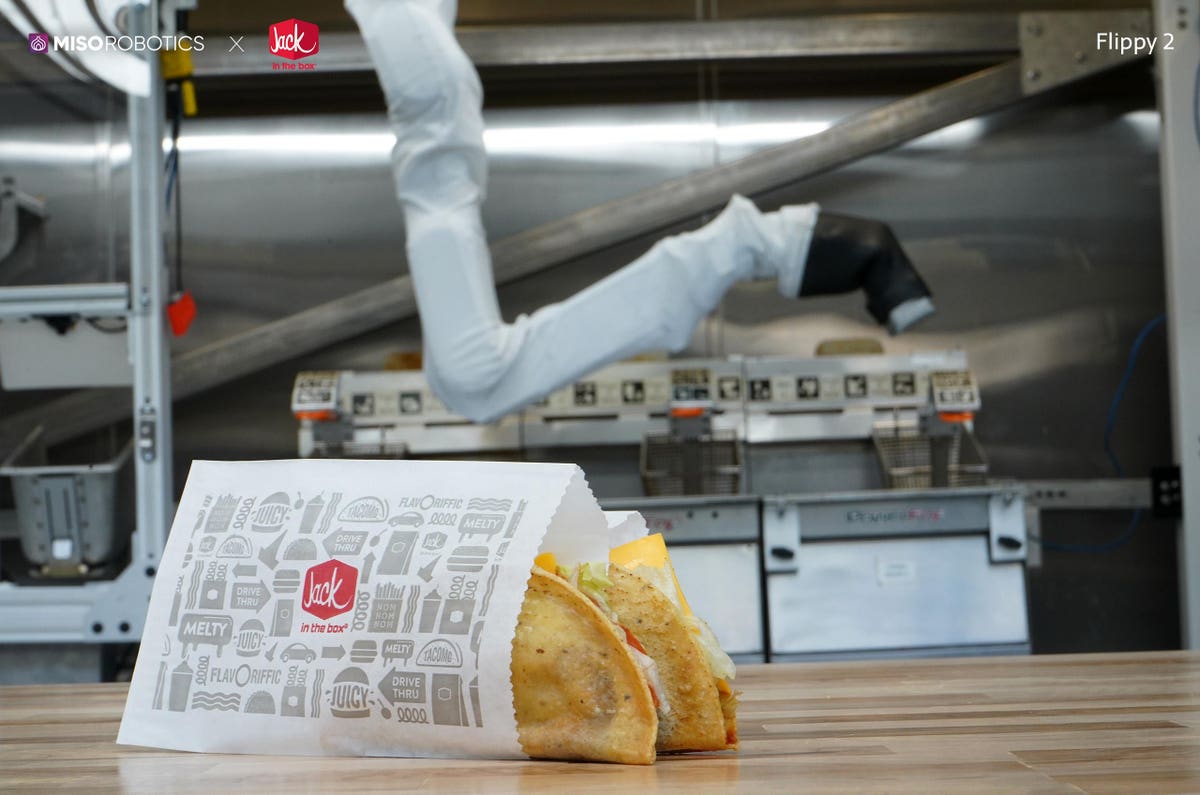 If you still haven’t heard of Flippy, chances are you will soon. Miso Robotics’ food processor has taken over fry stations in much of the White Castle system, and now Jack in the Box
testing the technology.

Miso today announced a partnership with the California chain to test its Flippy 2 and Sippy products at one of its standalone restaurants in San Diego. Flippy 2 will leverage artificial intelligence, machine learning, computer vision and data analytics to operate the fryer, while Sippy will do the same to facilitate the beverage station.

Flippy 2 is sure to have its hands full with Jack in the Box’s famously robust menu, maneuvering items ranging from curly fries to tacos to chicken nuggets. Meanwhile, Sippy integrates with a restaurant’s POS system to automatically process drink orders for purchase.

Jack in the Box will test the integration of Flippy 2 and Sippy into its operations and measure the benefits of a connected kitchen, as well as employees freed up for more time in front of customers. If the company likes what it sees, a wider rollout is possible “in the coming months,” according to a press release.

Automation of some tactical-level tasks is undoubtedly desirable as the industry continues to struggle with significant labor shortages and unprecedented quit rates. Operators expect labor shortages to continue this year and most (including 78% of quick service operators) plan to leverage automation to help fill those gaps, according to the National Restaurant Association 2022 State of the Industry Report. Two-thirds of restaurateurs say technology and automation will become more mainstream this year.

For Jack in the Box in particular, CFO
Tim Mullany said on the company’s latest earnings call that labor shortages put pressure on same-store sales performance in the first quarter as the trend limited store hours. These labor pressures have been going on for some time now, and in November Mullany expressed confidence in automation as a potential solution.

“We are working on robotics, particularly at the fry station, and we will have a test underway shortly and we are optimistic about what this has for us in the long term. We also review beverage vending machines with respect to removing labor from the system. These technologies are things that our analysis suggests could be quite significant when we look at the long-term and system-wide economic model,” he said.

Jack in the Box has also rolled out new software that enables more efficient labor scheduling and other tools to improve economy at the restaurant level. On its first-quarter call, the company said it had spent about $9.4 million in capital expenditures, including on those technology initiatives.

If this test (and this budget) were to increase, it would be a major feather in Miso’s cap.

“Beginning our journey with a leading brand like Jack in the Box is a huge step in our commitment to helping restaurants increase throughput, reduce costs and create a safer environment for their staff,” said the Miso CEO Mike Bell in a statement. “From tacos to curly fries to soda fountains, the future now belongs to Jack in the Box, and we’re excited to serve as the company’s technology arm to ensure a quality product ends up between the hands of his customers every time they order.”

Miso Robotics was founded in 2016. The company first partnered with White Castle in July 2020 during the throes of the Covid-19 pandemic. Soon after, the burger chain expanded the pilot to 10 more restaurants, then earlier this year announced it was rolling out Flippy 2 to 100 more of its 350-unit system.

Jack in the Box is much, much bigger, with over 2,200 US locations and a strong tailwind for more. Last quarter, Jack in the Box closed 26 development deals and signed 98 future restaurant openings, bringing the total number of deals to 50 and commitments to 201, its most unit commitments in the company’s history. the company.

In a statement, Jack in the Box COO Tony Darden called Miso’s technology a “good fit” for the company’s growth.