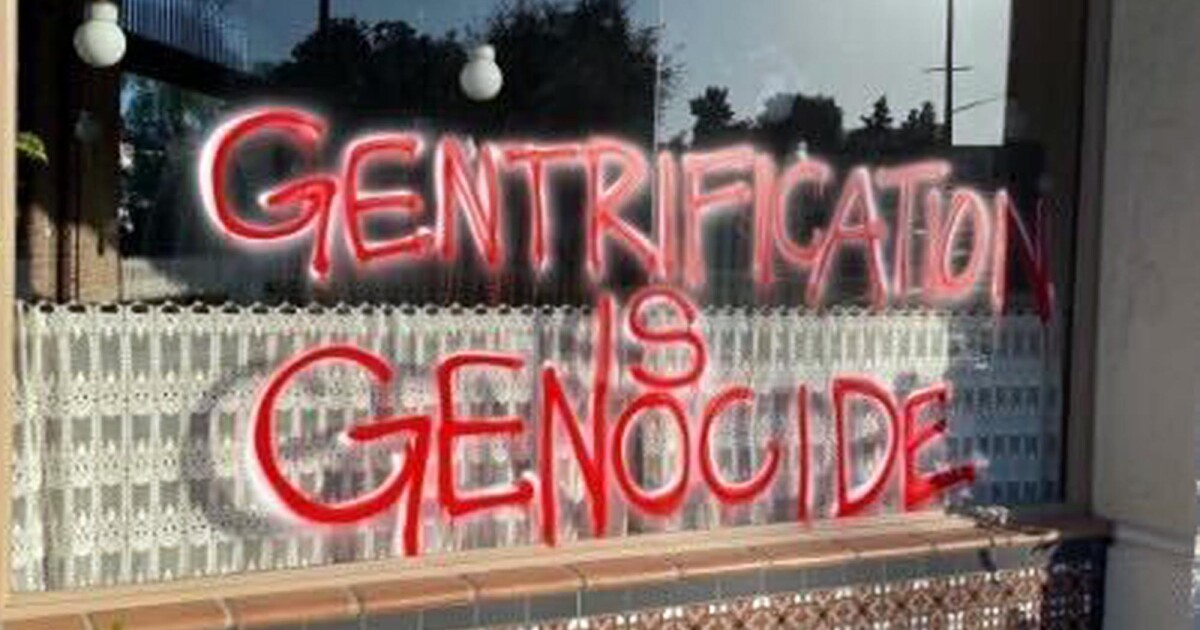 Early Wednesday, long before the doors open for the first time Glassell Park’s new restaurantthe Dunsmoor team came up with bold red and white lettering spray-painted on its windows.

“Gentrification is genocide,” reads in all caps and in Spanish and English, each label on one side of the corner building, according to the owners.

It was just the beginning. The day would end with a protest that saw handmade signs reading, “GENTRIFICATORS ARE ON THE MENU TONIGHT!” pressed against restaurant windows while customers dined inside. Another neon sign bemoaned the restaurant’s prices: “F — YOUR LENTILLES AT $23!!!”

Former Hatchet Hall chef Brian Dunsmoor’s new restaurant opened on Wednesday evening in a historically Latin neighborhood that has seen a rising property values ​​and changing demographics for some time. Coupled with its proximity to Highland Park, Glassell Park is one of many neighborhoods in the Los Angeles area at the heart of the city’s ongoing discussions of gentrification and displacement.

“Last night we did almost 100 covers [served guests], and I hit all the tables,” restaurant partner Taylor Parsons said Thursday morning. “I would say 50% were from the neighborhood, like walked here, and they were all really excited. Some of them got into verbal altercations with protesters outside, entering or leaving, and some approached when they saw the protest unfolding.

“It’s a range of reactions. I think there is concern and there is also excitement.

Before the demonstration, there was marking. Parsons said restaurant security cameras captured the vandalism at 4:32 a.m. Wednesday. Based on the written message, placement, handwriting, and painting, the restaurant team believed they were made by the person(s) who tagged the restaurant in January.

A resident of the neighborhood for nearly a decade, Parsons lives about five minutes from the restaurant and rushed to the space. A film of graffiti affixed to the windows, already in place, allowed the team to quickly remove the tags, and Parsons said he would file a police report on Thursday.

On Tuesday, a new Instagram account by the name of @dunsmoorisdone posted a joint call to action with Street Watch LA, a community-minded advocacy group founded by the LA Chapter of the Democratic Socialists of America and the Los Angeles Community Action Network.

The Instagram post called on protesters to arrive in Dunsmoor, which it said would “bring impatiently gnawed gentrifiers ready to pay $200 per diner from across the county to this neighborhood that has yet to fully gentrify.”

“The actors involved have already helped further gentrify other LA neighborhoods with their restaurants, including Culver City, Mar Vista and Venice, and now they’ve set their sights on speculation to the east and beyond,” adds the message. “This group of restaurants will cause increased displacement – ​​and homelessness – unless they are stopped. Please come help send a clear message that these people have not only chosen the wrong neighborhood – but that pioneers of gentrification can no longer rely on a sense of entitlement to settle and cause displacement – and homelessness – wherever they please. .

Representatives for the @dunsmoorisdone Instagram account, which had 47 followers on Thursday, and Street Watch LA could not be reached for comment at the time of publication.

Parsons said about 60 protesters arrived Wednesday and stood outside the restaurant, which has occupied a building that has been vacant for years (decades, according to the owner, though the space was reportedly used for in-home displays). A neighbor who had seen a Facebook chat post about a protest in Dunsmoor on opening night alerted restaurant staff.

From around 5:00 p.m. to 10:00 p.m., protesters held up signs with exclamation messages such as “Save the neighborhood! We say NO to gentry restaurants! Some were walking up and down Eagle Rock Boulevard to the nearby cocktail bar, the equally upscale Grant, where a physical altercation occurred late Wednesday.

It “involved a woman who had been [dining] in Dunsmoor and walked up the block after dinner,” Michael Lippman, owner of the Grant, said in a statement to The Times. “Nothing happened inside the Grant (and none of our employees were involved). I myself am a longtime resident of Glassell Park and our neighborhood bar has been open for just under 20 years. a year, and we have never had any problems or seen any protests.

Parsons credits the size of the restaurant, publicity and the notoriety of its chef as factors that caught the protesters’ attention. On Wednesday, a number of Dunsmoor diners asked to cook their meals for takeout, and some canceled their reservations entirely, according to Parsons.

“People who were here took it on the chin,” he said. “I was proud of the staff; They did a great job. The customers were very understanding and we tried to have the most warm and hospitable service possible under the conditions. The primary concern in this situation is always the safety of your guests and staff.

The intent of the protest, as explained in @dunsmoorisdone’s only Instagram post from Thursday, is for the restaurant to close. Parsons said that wouldn’t happen. The restaurant’s structure, however, includes consideration of costs to diners and the neighborhood, he said, by limiting entrees to less than $40 and capping wine markups below industry standards. .

The restaurant serves seafood, meats, and vegetables prepared using a number of methods and techniques common in early American history, such as canning and fire roasting. These $23 lentils, for example, include smoked mushrooms, homemade red onion relish and sour cream, while the $11 cornbread – a signature of the Dunsmoor days at Hatchet Hall – uses here cultured butter, green peppers, white cheddar and honey.

The team discusses pricing every day, said Parsons, who admits he doesn’t have all the answers.

“We’re just trying to bring a great little restaurant to this neighborhood and be good neighbors and community members and stewards of our space, our street,” Parsons said. “We all live here, nearby. We are not trying to disrupt anyone’s livelihood or life.