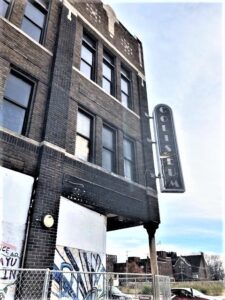 In a year or two, can you imagine yourself waltzing in the Coliseum Building in the Longfellow neighborhood at 2700 E. Lake St. for a cocktail party, to buy goods and services, find a job, or see an art exhibit? ? Taylor SmrikÃ¡rova, project manager for Redesign, Inc. (aka Seward Redesign) can. â€œThe Colosseum has good bones, it just needs help,â€ she said.
SmrikÃ¡rova, who has an architectural and real estate background, envisions an open and welcoming lobby, rooftop space, and a diverse and diverse tenant population. She is enthusiastic and hopeful about the redevelopment of East Lake Street following the civil unrest of 2020 when 150 buildings were set on fire and dozens torched after the murder of George Floyd.
The Coliseum has had several lifetimes: it was built in 1917 and opened as a Freeman Department Store, successfully operated as a family business until the 1940s when it was sold to the May Department Stores Company based in St. Louis. This sale was unsuccessful and in 1956 the property reverted to the Freemans. In 1975, Freeman sold to Roger Podany, who sold used office furniture and renamed the building for himself. Although Podany didn’t invest much in the property, he kept the ballroom on the third floor and rented it out to rock bands, including The Suburbs, for practice. When Podany sought to sell to a known slum owner, the Longfellow Community Council (LCC) stepped in and sought out a community developer. Enter Fred Lehman. Lehman forged a partnership with a wealthy doctor who eventually withdrew from the market. The LCC came to the rescue in collaboration with the Neighborhood Revitalization Program (NRP). This, along with bank and additional funds from the city and neighborhood, enabled Lehman to purchase and rehabilitate the property. In 2001, the building reopened with tenants such as Denny’s Restaurant, a Latino health clinic, and the 3rd Police Station basement. The 3rd arrondissement moved after torrential rain flooded the basement. An out-of-town financial group then bought the building and managed it until 2020, when civil unrest rocked the building. Enter Chris Romano, Executive Director of Seward Redesign.
Redesign is a non-profit community developer with 50 years of experience in the Seward and Longfellow neighborhoods. It is also one of 16 non-profit organizations that have had access to an acquisition loan program called CAT (Community Asset Transition) created by LISC (Local Initiatives Support Corporation) in partnership with Hennepin County, JPMorgan Chase and the Minneapolis, Bush and McKnight Foundations, to help recover from the riots and the ongoing pandemic. Redesign and Partners are also seeking funding from We Love Lake Street Grants, PACE Equity, New Markets Tax Credits, Tax Increase Funding, Historic Tax Credits, Minneapolis Commercial Property Development Fund. and Xcel Energy discounts.