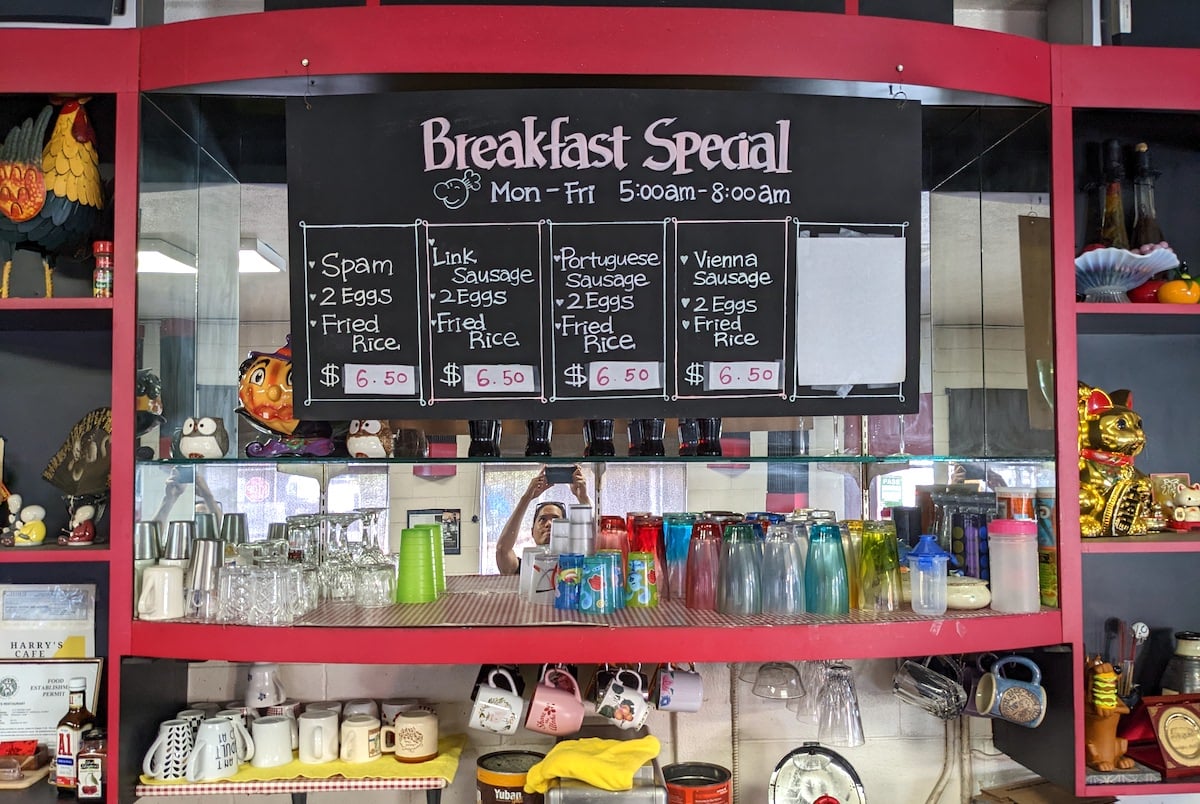 Ohen I lived in Kaka’ako, I loved being able to walk everywhere. Especially places where parking is a problem. Like Ala Moana Center on holidays, Magic Island on weekends, and Harry’s Cafe most days. I loved my old apartment, but when it came to cooking, my options were a microwave and a hot plate. So having Harry’s Cafe across the street was a convenient way to satisfy my cravings for a favorite breakfast: pancakes.

I remember the first time I ordered their pancakes. It was around 6 o’clock in the morning. I sat at the counter and watched people coming and going, going to work or returning from a long night. There were a lot of big guys in neon green shirts. Construction workers refueling for the day. I noticed that the guy sitting next to me looked familiar. Turns out it was my next door neighbor. I had seen him around the building but this was the first time I had a conversation with him.

SEE ALSO: Hawaii’s Oldest Restaurants Are Still “Ono” After All These Years

Prices may be out of date. Photo: Eric Baranda

Now that I’m married and living in the suburbs, I decided to come back with my wife and my mother-in-law. A kind of check-in to see how an old friend is doing. I was pleasantly surprised to see that they now accept credit cards. For a while, I started with the pancakes ($8 for a small stack of two). I wasn’t sure what to expect, but I was looking forward to a taste. They were better than I remembered. Substantial and thick. Golden brown and harboring the slight sweetness of vanilla.

Next is the ground beef ($14.25). It’s hard to go wrong with this local comfort food favorite. A beef patty, with a slight smoky flavor, dipped in gravy.

SEE ALSO: What you don’t know about the last Anna Miller on Earth

The final course was another comfort food: beef stew ($14.25). Consisting of a generous portion of carrots, accompanied by pieces of fatty beef, swimming in a sauce. A rice and mac salad completes the dish.

When it comes to classic eateries like Harry’s Cafe, there’s a sense of history and nostalgia that pervades the place. Looking down at the floor, you can see the scratches that have accumulated from decades of going back and forth. A faded poster for a Kenny Loggins concert in Waikīkī in 1995 is framed near the back corner. In the opposite corner is an arcade cabinet offering card games. On another wall is a framed HONOLULU magazine article about Harry’s Cafe, written years ago by Frolic’s editor, Mari Taketa. It’s near a photograph of the original owners of Harry’s Cafe. The place hasn’t really changed over the decades, it just added more history. A story I can show my son when he’s old enough for pancakes and ground beef.