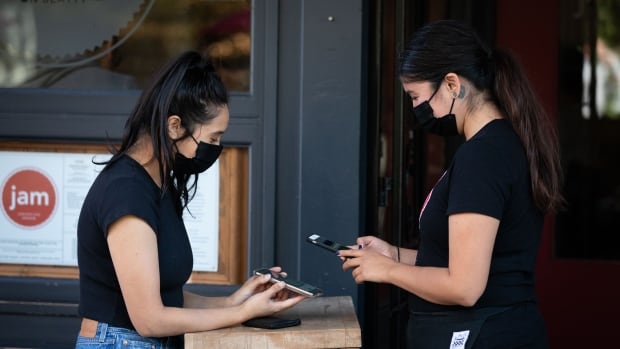 Beginning Sunday, customers at restaurants and bars across British Columbia must be fully immunized – and show proof of it.

From Monday, the restriction that requires customers to remain seated will be lifted, allowing people to roam freely in restaurants and bars.

Jeff Guignard, executive director of the Alliance of Beverage Licensees in British Columbia, said they expect the transition to the full vaccination requirement to be smooth.

Guignard said when the vaccine passport was first launched in September, about two-thirds of their members said they had “difficult and abusive interactions with some customers,” including customers yelling at staff.

â€œCustomers would come in and blame frontline staff for their disagreements with public health protocols, which is just plain stupid,â€ Guignard said.

However, he noted that the problem has eased as customers and restaurants have adjusted.

â€œI don’t expect a significant decline from customers at this point,â€ Guignard said.

Jam Cafe owner Mike Deas-Dawlish said he didn’t know what to expect in the coming weeks for his restaurant’s two locations in Vancouver and Restaurant Victoria. Sunday afternoon, they had no problem.

Despite a potential conflict with clients, Deas-Dawlish is relieved that clients are now required to be fully immunized.

Brad Roark, of Nook Restaurants, said there had been no incidents involving vaccine passports at any of their several Vancouver locations.

â€œMaybe we’re lucky enough, but we haven’t had any instances where people have been upset or belligerent,â€ Roark said.

Roark said on rare occasions they had to turn someone down, the person was understanding.

“I am very fortunate that we have such a great customer base.”

Roark said having customers able to visit other tables would allow for a more relaxed environment. He added that since Nook locations are largely neighborhood restaurants, many customers meet people they know and like to take the opportunity to catch up.

Lifting this restriction helps nightclubs that rely heavily on this social aspect, according to Guignard.

â€œNow when you see your friends you can put on your mask and walk across the room and say hello,â€ Guignard said.

He also added that this is good news for events like wedding receptions, where people previously had to sit.

“It’s not [only] safe drinking and dining in BC again, let’s make it fun again. “

How this Oakland cupcake business survived the pandemic