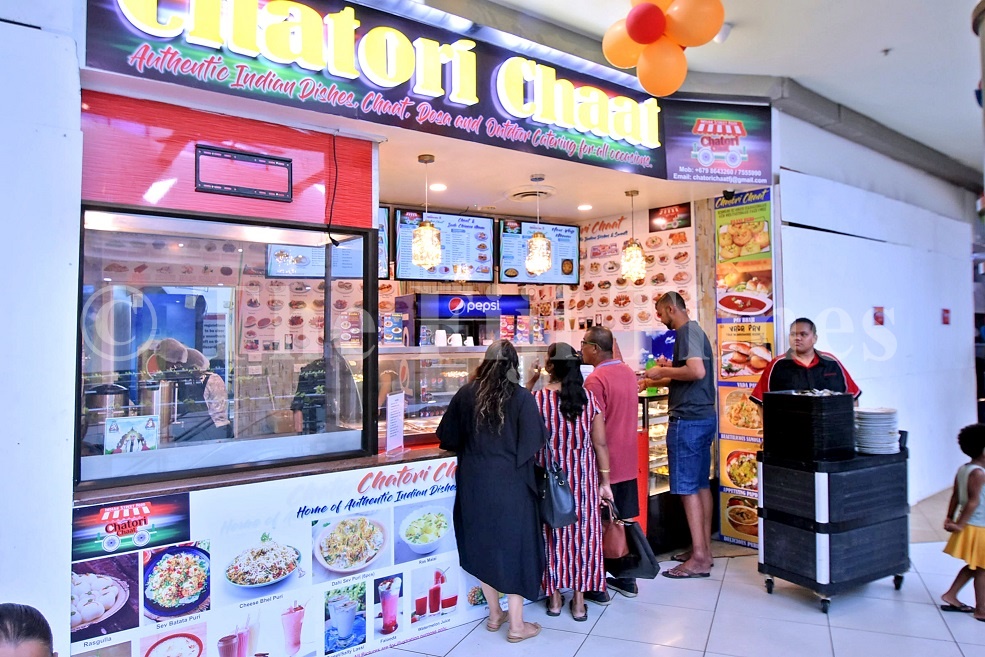 Indian cuisine has made its way into Fijian culture, but how often are we offered the chance to experience authentic Indian street food.

Amit Kumar Sinha, owner of Chatori Chaat, has brought this cultural experience to Fiji with his chain of restaurants specializing in Indian street food.

Its food, however, comes from all over India, as street food and snacks are very popular across the country. Chaat is perhaps the most popular type of Indian street food, and the type Mr. Sinha’s restaurant is named after is chaat; street food sold in carts or by the roadside.

Mr. Sinha came to Fiji in 2007 to pursue a job opportunity in Store Operations Management for Motibhai and Company Ltd at Nadi International Airport and held this position for six years.

Owner of Chatori Chaat Amit Kumar Sinha (third from left) with members of his staff at the MHCC food court in Suva.

When his contract ended in 2013, he sought a career in restaurant management, but running his own has yet to take off.

Prior to arriving in Fiji, Mr. Sinha had made a name for himself in the hospitality industry, having completed years of study in the field and earned a master’s degree in business administration.

He worked in the industry from 1999, even as a freelance mixologist and bartender for hotels and resorts at one point.

Somewhat adept at juggling fire and a variety of cocktails and mocktails, Mr. Sinha continues to teach and train others in the art of mixology in Nadi.

The owner of Chatori Chaat is Amit Kumar Sinha (third from the left of his staff at the MHCC food court in Suva. Photo: ELIKI NUKUTABU

Mr Sinha entered the restaurant business in Fiji in 2016. Together with a business partner, he opened a restaurant called Mumbai Dhaba in Nadi, which later expanded with a new branch in Lautoka.

It was going well for him until the COVID-19 pandemic saw hundreds if not thousands of local businesses shut down, and the Nadi branch in Mumbai Dhaba was no exception.

Always a determined businessman, Mr. Sinha was not deterred by this. He saw an opportunity amidst these dark times and left Mumbai Dhaba to pursue his dream of starting his own restaurant.

“It was very difficult to start a new restaurant during COVID, but my friends helped me financially, they gave me money to start up and I got loans and government assistance,” said Mr Sinha.

And so began Chatori Chaat with an investment of $75,000 and the opening of the first branch in Namaka, Nadi in 2020.

Soon after, he opened the second branch at the My FNPF Center in Nadi. Despite his success in Nadi, Mr Sinha had always had the idea of ​​opening a restaurant at the MHCC in Suva.

“When I first came to Fiji, every time I came to Suva, I found this place (MHCC) very appealing. It’s like a hub for foodies.

Mr. Sinha reportedly opted to set up his first branch with the CSMC, but was unable to do so due to COVID-19 and financial issues. That didn’t stop him for long as his CSMC branch officially opened last Saturday.

He is still recruiting for this new branch and will stay in Suva to train his new staff in the art of chaat.

“It’s hard to teach them complicated recipes that are totally new to them, but I have some good employees who have been here since day one.”

Mr. Sinha plans to open two to three more restaurants in the near future, including one more in Suva within the year.

He said the recent opening of MHCC was just a soft start as he intended to do main courses and live dhosas once his staff members were fully trained and his kitchen would be finished.

Having had several customers tell her they are the best at confectionery, Chatori Chaat is taking orders for Diwali and will be selling prepackaged boxes of sweets for $10.

COVID is tough, but Velvet Taco’s growth plan is better