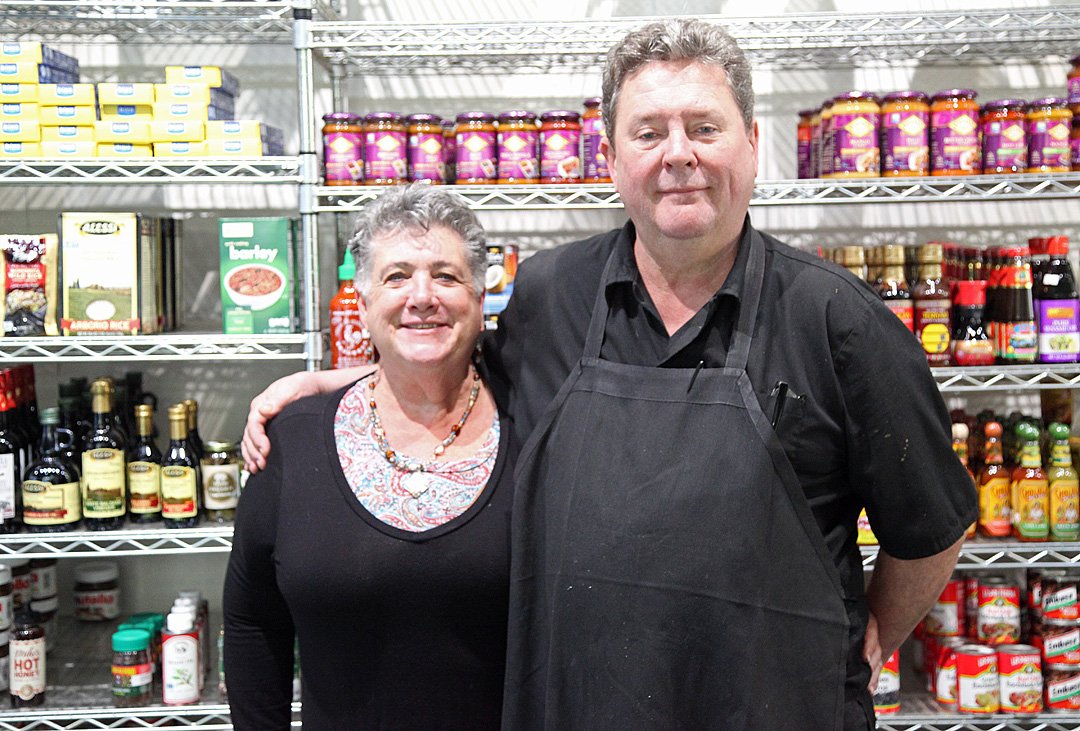 As the pandemic enters its third year, businesses in Yellow Springs continue to adapt. Closures, illness and difficulty obtaining needed items continue to be cited as things that have had lasting effects on local businesses – but also perseverance, optimism and gratitude.

In this third round of interviews with local business owners about how the pandemic has affected their businesses, the News spoke with food establishment owners Karyn Stillwell-Current and Brian Rainey; owners of The Winds Cafe, Miguel’s Tacos and Lucky Dragon declined to be interviewed at this time.

The news will feature more companies in future stories as this series continues.

As downtown restaurants reacted to the changing business landscape brought on by a global pandemic, Current Cuisine managed to avoid one of the common effects of those changes: it stayed open.

“We’ve never closed once,” co-owner Karyn Stillwell-Current said. “We were an essential business.

Company owners have credited Current Cuisine’s ability to remain vigilant for safety measures early on. They implemented a mask mandate and social distancing protocols for customers before the village or state took similar action, and installed plexiglass barriers at deli counters.

These preventative measures paid off, they said, as no Current Cuisine staff member became ill with COVID-19.

When Stillwell-Current and her husband, Steve Current, opened Current Cuisine as a restaurant business in 1983, the business developed a local clientele, in part through a dinner delivery service they provided to the ‘era. As the ongoing pandemic made isolation a necessity, the company relaunched the dinner delivery service it offered decades before.

“Some people couldn’t get out or felt unsafe, so we wanted to provide some kind of service for them,” Stillwell-Current said.

The revived service, Stillwell-Current said, wasn’t just popular — it was received with gratitude. Customers began dropping off thank you cards, many of which were handmade, and other thank you notes. Staff members were treated to food, wine, gift cards to local businesses and other monetary contributions.

“I cried the whole time, every time this happened,” Stillwell-Current said. “It was such a heartfelt community effort, and I felt like it was really important.”

As the pandemic persists, Current Cuisine has faced many of the same issues plaguing other businesses, particularly those affecting the supply chain.

“The company my husband bought powdered sugar forever from hasn’t had any for weeks,” Stillwell-Current said. “If you’re a baker, you need your powdered sugar. We just figure out how to find it another way.

Just up the block is another long-running village establishment, Sunrise Cafe. Owner Brian Rainey, who bought the business in 2004, has seen many ups and downs over the years.

However, he described the ups and downs of the past two years as “brutal”.

When statewide lockdowns began in early 2020 and restaurants were forced to postpone indoor dining, Sunrise had to innovate. Rainey started by offering take-out orders from the restaurant’s window. Over the summer, when indoor seating was limited, Rainey said the business benefited greatly from the crowds that descended on the village for the local comedian’s series of rural comedy shows. Dave Chappelle.

By fall 2020, however, the shows had ended and business eventually slowed, forcing Sunrise to reshape itself again.

“We started doing winter delivery just to try to supplement our sales,” Rainey said.
In 2021, additional waves of COVID-19 have created problems for Sunrise Cafe, especially with staff.

“I had to close at night for a week because we had no one to cook,” he said.

After that, as infections increased, staffing became a delicate dance.

“It was like, ‘Who’s sick? Who’s eligible to come back? Who’s going to work tomorrow? It was just every day,'” he said.

A bright spot along the way has been the minimized impact of supply chain issues. Sunrise’s emphasis on local partnerships for many of its ingredients has proven beneficial, both in terms of price and availability.

“It’s interesting how one supply chain issue can lead to so many other issues,” Rainey said.

“Sunrise is blessed with local stuff.”

Brian Rainey, owner of Sunrise Cafe and Calypso Grill and Smokehouse, said the innovation, creativity and local partnerships for many of his ingredients have proven to help his restaurants weather the COVID-19 pandemic. (Photo by Ben Guenther)

Further down Xenia Avenue, at the south end of the village, is Rainey’s second restaurant, Calypso Grill and Smokehouse. While he already had the idea of ​​opening a distinctly unique restaurant as a second venture, Rainey was inspired to turn it into an authentic Caribbean spot during a trip to the Cayman Islands a few years ago.

“I met this guy named Barry who only makes jerk chicken three days a week in a little roadside shack,” he said.

Back home, he said his business ventures had become an obsession and Calypso opened in March 2018.

When the pandemic hit two years later and indoor dining was suspended, Calypso was able to continue doing business through its drive-thru window.

“We had cars lined up around the building every night,” Rainey said.

A statewide measure that allowed businesses to sell alcoholic beverages to go was an added bonus, as the restaurant offers a specialty cocktail menu. Rainey added that Calypso has offered delivery since its inception, which has remained a constant throughout the pandemic.

“We have just started deliveries,” he said.

Although Calypso had some upsides at the start of the pandemic, Rainey said it wasn’t all upside. Price increases and product availability issues have been daunting.

“He always seems to be on the move,” Rainey said. “Sometimes I can’t eat ribs. Sometimes ribs double in price.

He added that if he didn’t monitor the ongoing price changes with a keen eye, it could be a month before he realizes an item’s price has exploded.

Rainey said hiring staff has also been a challenge.

“You schedule an interview and nobody shows up,” he said, adding that staffing fluctuations have impacted the staff he has.

Even so, Rainey said he feels he now has a solid staff to tackle what is usually Calypso’s busy season.

“I feel like we’ve grown our name and are just here to serve great food,” he said. “I am optimistic.”

* The writer is a freelance news reporter. He lives in the village and runs a bar at Yellow Springs Brewery. He is interested in the arts, the outdoors and social issues. He can be contacted at [email protected]